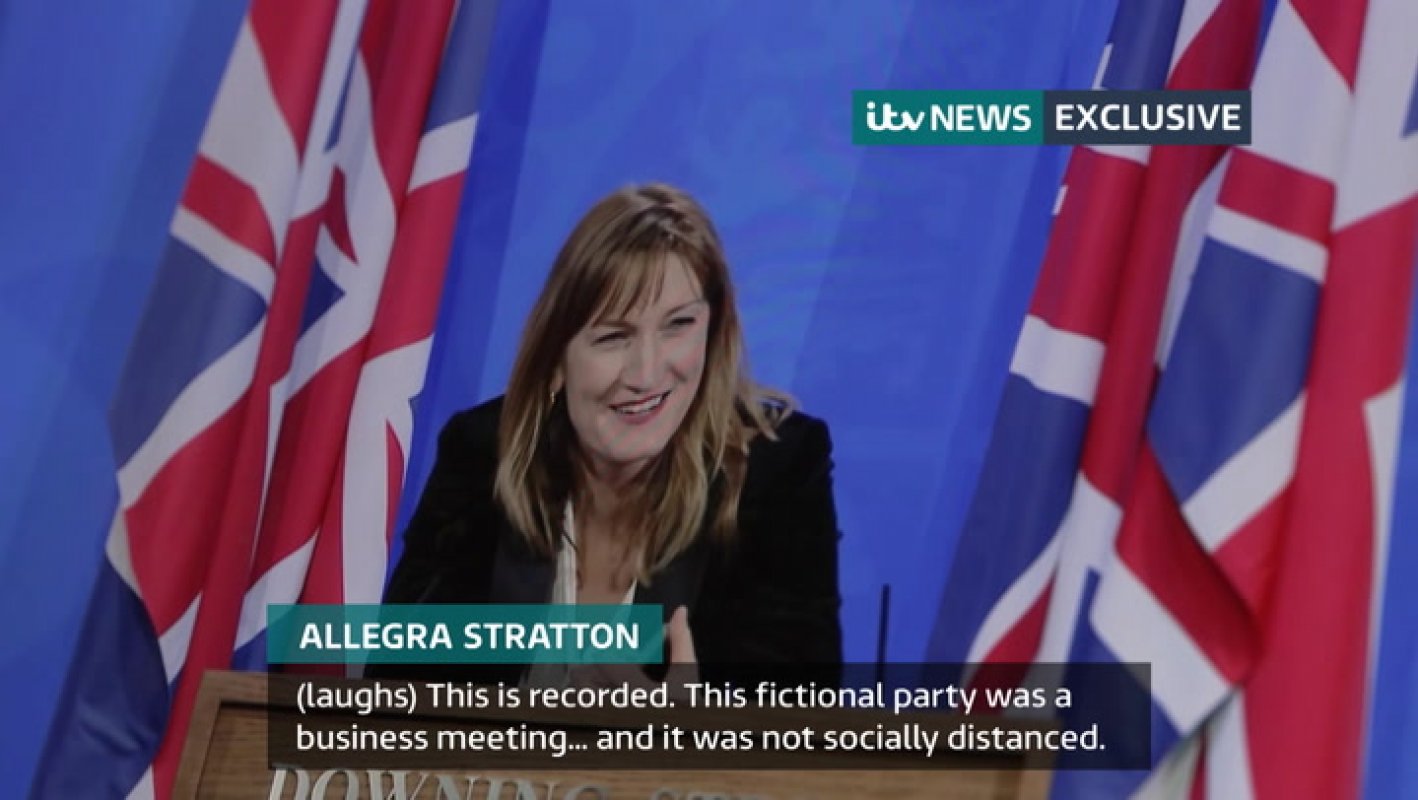 In the video from last December obtained by ITV News, Boris Johnson's then spokesperson Allegra Stratton joked that the party was “was not socially distanced” and suggested passing it off as “a business meeting”.

The footage was recorded as a rehearsal for planned televised press briefings, with mock questions posted by the prime minister's special adviser Ed Oldfield and other staff.

Mr Oldfield can be heard to mockingly ask Ms Stratton: “I've just seen reports on Twitter that there was a Downing Street party on Friday night. Do you recognise those reports?”

The video, dating from 22 December, was recorded just four days after the Christmas party took place – on Friday 18 December.

At a key moment in the video another staff member in the room says: “It wasn't a party, it was cheese and wine.” Another, apparently seriously, chimes in: “Just to be clear, it's not a party.”

At this point Ms Stratton quietly mouths “this is recorded” to the other No 10 staff, and switches to referring to the party as “fictional”.

It comes after a week of anger over the reported Downing Street bash, which is said to have taken place despite lockdown rules.

Labour leader Keir Starmer said it was “shameful” for the government to “lie and laugh about those lies”.

He added: “The prime minister now needs to come clean, and apologise. It cannot be one rule for the Conservatives and another for everyone else.”

The SNP’s Westminster leader Ian Blackford meanwhile said the video was “damning and leaves the prime minister with a lot to answer for”.

He added: “If this is true, then the prime minister’s position is untenable and he must remove himself from office immediately.”

And one source who was aware of the party in Downing Street told ITV News: “We all know someone who died from Covid and after seeing this all in the papers I couldn't not say anything. I'm so angry about it all, the way it is being denied.”

Boris Johnson insisted on Tuesday that No 10 staff followed all Covid rules, while chancellor Rishi Sunak denied attending the bash.

The event, the existence of which emerged nearly a year after it happened, took place at a time when parties were banned under lockdown rules.

Asked in the Commons on Tuesday morning to “categorically deny” that “he or any of his officials or special advisers attended any of the Downing Street Christmas parties”, Mr Sunak said: “No, I did not attend any parties.”

He made no comment on whether his officials or advisers had attended.

Speaking later in the day during a visit to HM Prison Isis in London, Boris Johnson said: “What I can tell you is that all the guidelines were observed, continue to be observed.”

Asked if he had investigated the incident personally, Mr Johnson said: “I am satisfied myself that the guidelines were followed at all times.”

In a statement the Metropolitan Police said the footage would inform its decision about whether to launch an investigation into the party.

“We are aware of footage obtained by ITV News relating to alleged breaches of the Health Protection Regulations at a government building in December 2020,” the force said.

“It is our policy not to routinely investigate retrospective breaches of the Covid 19 regulations, however the footage will form part of our considerations.”

Meanwhile, the Department for Education admitted on Tuesday to having held a Christmas “gathering” last December, when London was under Tier 2 coronavirus rules.

The department said the party took place in its office building, at a time social mixing between households was banned and the number of people in one indoor space was limited to six by law.

The admission came after former education secretary Gavin Williamson was reported by The Mirror to have thrown a party and delivered a short speech at the event on 10 December last year.

A DfE spokeswoman said: “On December 10 2020 a gathering of colleagues who were already present at the office – and who had worked together throughout the pandemic, as they couldn’t work from home – took place in the DfE office building in London at a time when the city was subject to Tier 2 restrictions.

“The gathering was used to thank those staff for their efforts during the pandemic.

“Drinks and snacks were brought by those attending and no outside guests or supporting staff were invited or present.

“While this was work-related, looking back we accept it would have been better not to have gathered in this way at that particular time.”

No 10 had previously claimed that no rules were broken during Matt Hancock’s affair with his aide and Dominic Cummings’s trip to Barnard Castle – two events which ended in high-profile resignations.

A poll by Savanta ComRes released on Tuesday found two-thirds of the public believe Mr Johnson should apologise for holding the festive events, at least one of which he is reported to have been present at.

Three-quarters of people have heard of the story – a relatively high cut-through rate for Westminster affairs.

Three in five say they understand that the party could not have taken place at the time without breaking Covid rules, while 72 per cent believe there is one rule for the government and one for the public.

This latter belief extends to 2019 Tory voters, 56 per cent of whom agree with the statement.

Just one in six voters say No 10 staff deserved a Christmas party.

Asked about the leaked video, a Downing Street spokesperson said: “There was no Christmas party. Covid rules have been followed at all times.”

The information provided on this website is for reference only. C21 International shall not be liable for any errors, omissions, misstatements, or misrepresentations (express or implied), concerning any Information, and shall not have or accept any liability, obligation, or responsibility whatsoever for any loss, destruction, or damage (including without limitation consequential loss, destruction or damage) howsoever arising from or in respect of using, misusing, inability to use, or relying on the Information.
west
UK construction recovers as supply chain pressures ease
United Kingdom , London
Covid booster jab booking system opens to over-40s in England
United Kingdom
east