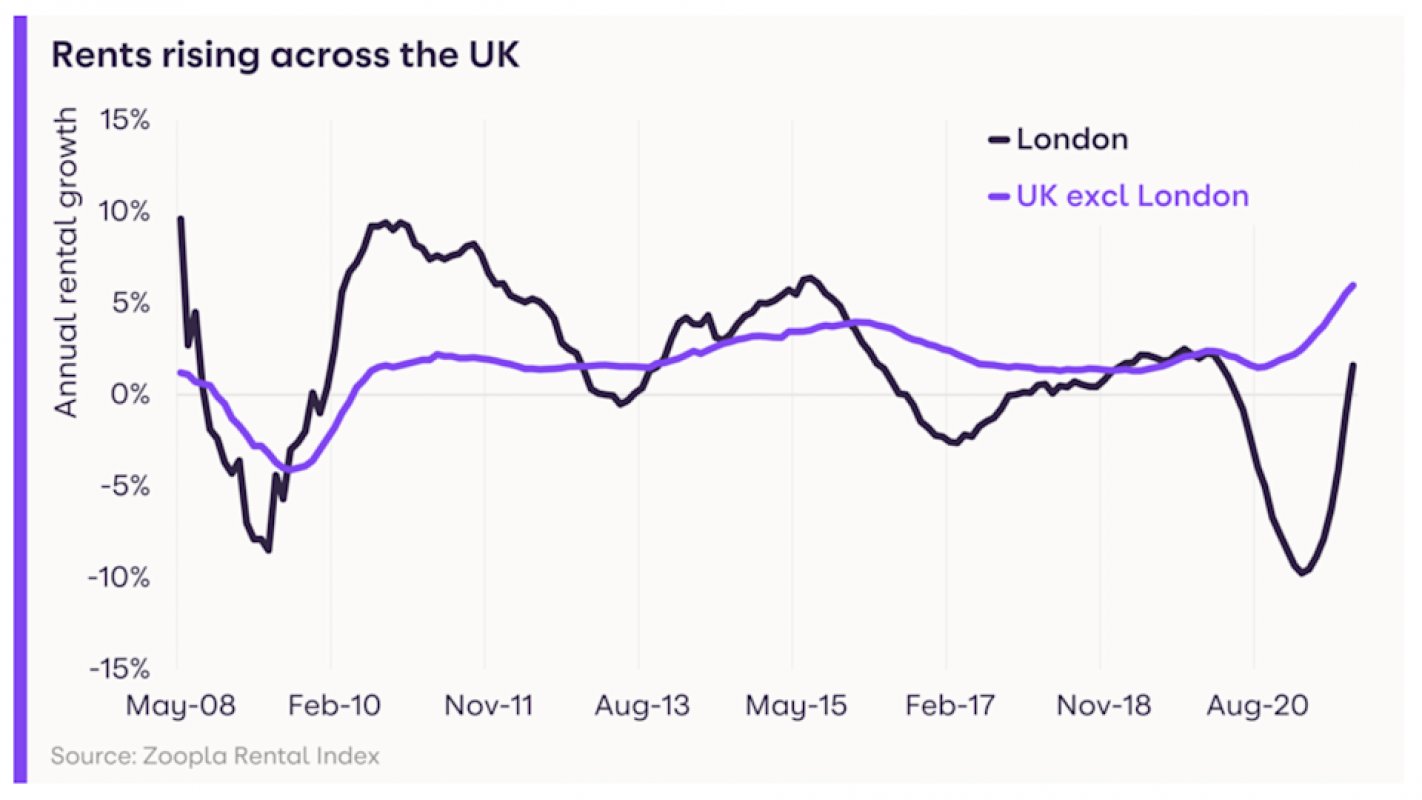 UK rental growth hit a 13 year high in the last quarter of the year as demand doubled in major cities thanks to the continued reopening of the economy, new data has shown.

According to Zoopla’s quarterly Rental Market Report, average rent in Britain increased 4.6% overall to £968 ($1,299) compared to the year before, and rose by 6%, excluding London. It climbed 3% over the last quarter to its highest level since 2008.

The study showed that demand continued to outstrip supply, which stood at 43% below the five-year average, and put an upward pressure on rents. The average time to let a property was 15 days.

Rental growth was close to, or at, a 10-year high across most UK regions, with the exception of Scotland, and London, where the market has lagged.

However, after 15 months of consecutive falls, London’s rents swung back into positive territory, rising by 4.7% between June and September, as offices reopened and city life resumed. But they still remained 5% lower than pre-pandemic levels in the capital.

Rents rose the most in the South West of England, growing 9% year-on-year, followed by Wales, which was up 7.7%, and the East Midlands, which saw a 6.9% rise.

Bristol led the way in terms of city growth, with an 8.4% increase in the year to September, followed by Nottingham at 8.3%, and Glasgow at 7.2%.

Rental demand in the central zones of Manchester, Edinburgh, and Leeds also doubled over the third quarter of the year compared to the first quarter, while demand in Birmingham increased by 60% thanks to the return of office workers and students.

The overall growth also came as tenants searched for properties with higher price bands as they sought bigger spaces due to remote working. Zoopla said this has not only characterised the sales market, but the rental market, too.

UK monthly rents now account for 37% of an average income for a single tenant occupant. However, even with strong rental growth, the measure of affordability remains in line with the five year average

The undersupply of rental properties in the country, and the strength of the employment market, will support rental growth into 2022, according to Zoopla.

“While the level of rental demand might ease in the near term in line with seasonal trends, demand levels will remain higher than usual, especially in city centres, where there is an element of pent-up demand being released,” Zoopla said.

It forecast more leeway for stronger rental growth in areas of the country where rents are relatively more affordable, suggesting that rents could rise above earnings outside of the south of England.

Meanwhile, London rental growth is expected to pick up to 3.5%, with rents ultimately exceeding pre-pandemic levels.

“The swing back of demand into city centres, including London, has underpinned another rise in rents in Q3, especially as the supply of rental property remains tight,” Gráinne Gilmore, head of research at Zoopla, said.

“Households looking for the flexibility of rental accommodation, especially students and city workers, are back in the market after consecutive lockdowns affected demand levels in major cities.

“Meanwhile, just as in the sales market, there is still a cohort of renters looking for properties offering more space, or a more rural or coastal location.”