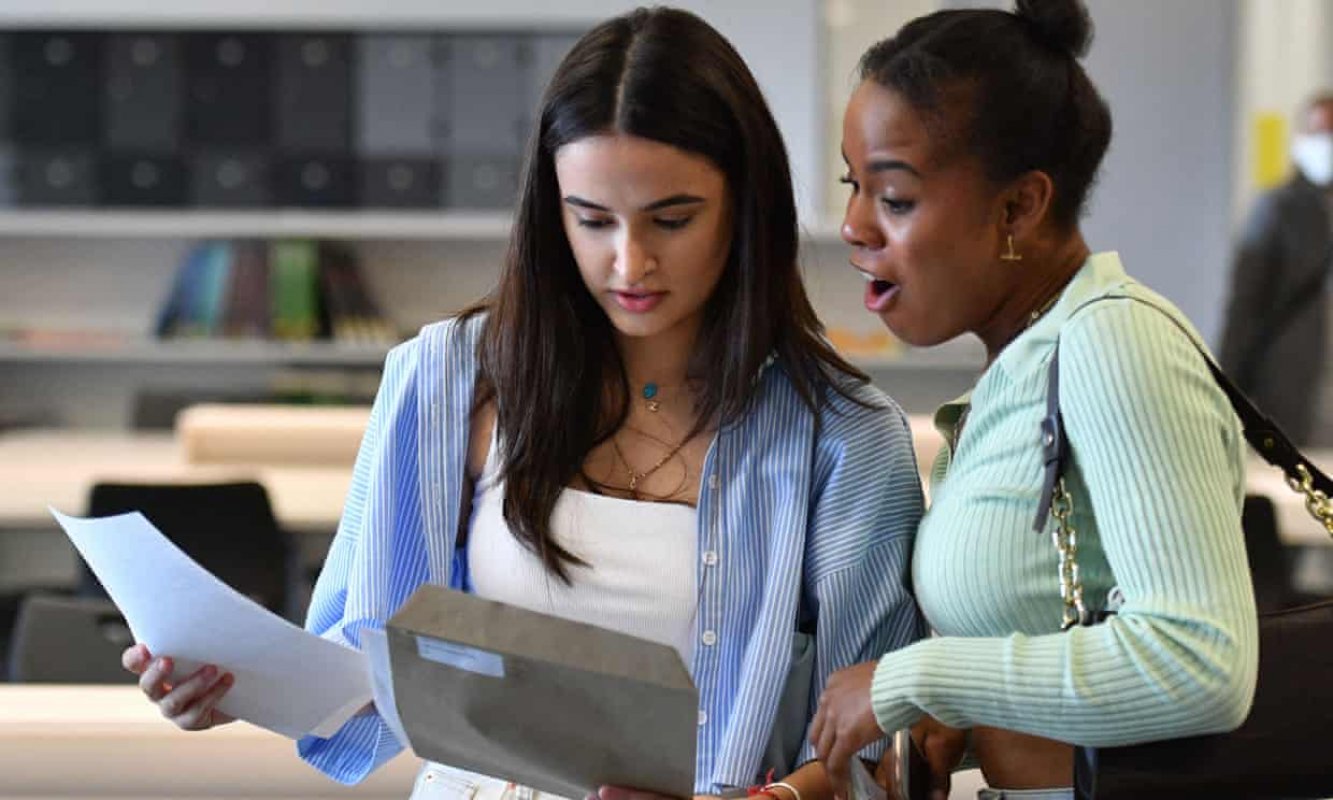 Nearly 45% of A-level entries across the UK have been awarded top grades in A-level results, a record-breaking return for students after more than a year of disruption and school closures during the pandemic.

The 44.8% in top grades in England, Wales and Northern Ireland matched earlier predictions by university admissions officers but was lower than others had feared, following a 13 percentage point increase between 2019, the last time formal exams were held, and 2020.

In Northern Ireland, 50.8% of entries were awarded A* or A, up from 31% in 2019, while in Wales the proportion awarded top grades rose by more than six percentage points compared with last year, to 48.3%.

This year, A-level results in England, Wales and Northern Ireland have been awarded through teacher-assessed grades (Tags) overseen by examination boards, while the Scottish Qualifications Authority will use a similar process in making awards. Education policy is devolved to national governments, so each of the four countries have their own systems and qualifications.

The rise was fuelled partly by a record-breaking increase in grades awarded by independent schools and centres outside the state sector, where 39.5% gained the top A* grade, compared with 27.4% in 2020 and 16% in 2019. Seventy per cent of entries at private schools received A grades or higher, compared with 39% at comprehensives and 42% at academies.

There were also wide disparities in regional results. While more than 47% of entries in London and the south of England received A* or A, 39% of those in the north-east of England did so.

The latest figures are likely to spark further questions about the unequal distribution of grades. The Joint Council for Qualifications (JCQ), representing the examination boards, said: “Exam boards looked at student work from all types of school and college as part of the external quality assurance process. They did not find that any type of school or college was more likely than others to have provided grades that did not reflect the standard of their students’ work.

“Indeed, they found that, irrespective of the type of school or college, the grades were largely supported by the quality of students’ work.”

Simon Lebus, the interim chief regulator of Ofqual, said it had been an “exceptional” year but said next year’s exams would be different.

“We’ve always said outcomes this year were likely to look different to other years. This has indeed proven to be the case. The pandemic will have had different impacts on students’ opportunities to learn and ​that mean​s​ the mechanisms we normally use to secure standards over time have not been deployed this year.

“We expect to get back to exams and formal assessments next year because although they are not perfect exams have proven to consistently be the best way of assessing what a student knows, understands and can do,” Lebus said.

The results show the gender gap for top grades at its widest since at least 2011, with the rate of A* and As standing at 46.4% for female students and 41.7% for male students. This marks a gap of 4.7 points, an increase on 3.1 points last year and a reversal of the trend seen in the three years prior, when male students outperformed female students.

The JCQ also issued details of the oversight carried out by exam boards in scrutinising the teacher-assessed results submitted by schools. It said that work from 1,101 centres in England – about one in five schools and colleges – was scrutinised. In 85% of all cases at Ofqual-regulated centres “subject experts were satisfied that the evidence supported the Tags [teacher assessed grades] that had been submitted”.

“Results will be withheld for these schools and colleges should these concerns remain unresolved on results day,” the JCQ said.

In Wales, the education minister, Jeremy Miles, told students: “While your experiences and the way in which you have been assessed have been different, the value of these qualifications is not. You can can be sure that your grades reflect your hard work throughout this year, and you fully deserve the qualifications you receive.”

Wales cancelled exams two months earlier than in England, which the Labour-led government said had provided greater certainty for centres and learners.

Scotland bucked the trend of rising grades, according to figures published by the Scottish Qualifications Authority, although A-C attainment rates were higher than in 2019.

Last year, Ofqual attempted to award qualifications in England using an algorithm that allocated grades to each school based on past results, but that was abandoned shortly after A-levels were published, following an uproar.

This year, grading has been left in the hands of schools without restrictions, but Ofqual and Gavin Williamson, the education secretary, have defended teachers from accusations of causing grade inflation.

“Teachers know what their students can do and, in the absence of formal exams, there is no person or system better placed to fairly judge young people’s abilities,” Williamson said.

The information provided on this website is for reference only. C21 International shall not be liable for any errors, omissions, misstatements or misrepresentations (express or implied), concerning any Information, and shall not have or accept any liability, obligation or responsibility whatsoever for any loss, destruction or damage (including without limitation consequential loss, destruction or damage) howsoever arising from or in respect of using, misusing, inability to use, or relying on the Information.