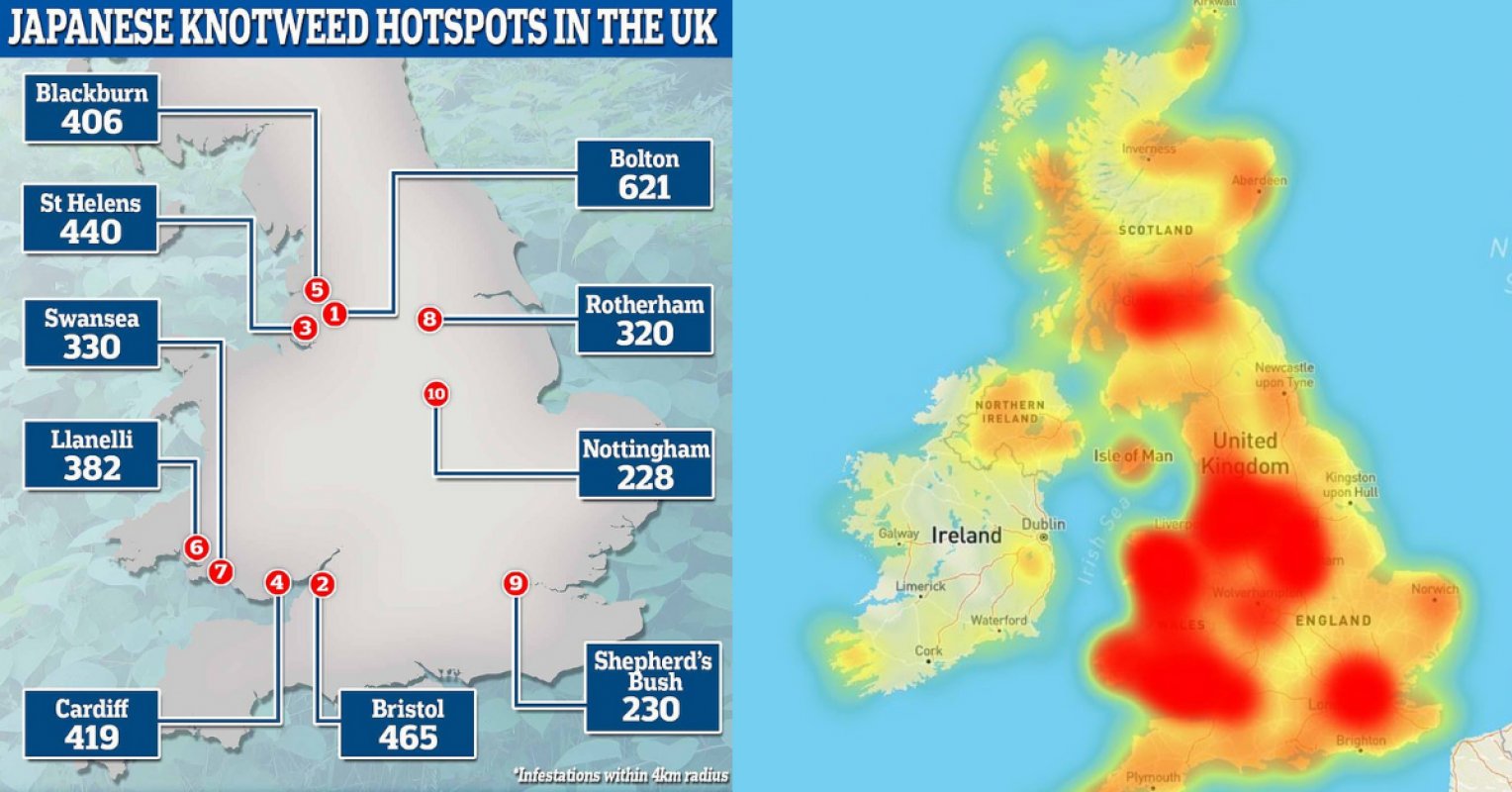 
Do YOU live in one of Britain's Japanese knotweed hotspots? Interactive map shows where invasive plant that can grow through bricks and foundations is flourishing

Japanese knotweed is a devastating invasive plant which can break through concrete, bricks and mortar, and new data reveals Bolton is the worst affected place in the UK.

The North West of England is one of the hardest hit parts of the country, with three places — Bolton (first), St Helens (third) and Blackburn (fifth) — among the ten most plagued locations.

Wales and the South West have also been hit hard, with Bristol (2), Cardiff (4), Llanelli (6) and Swansea (7) all in the ten worst affected places.

According to Environet, a company which specialises in the removal of invasive plants like bamboo and Japanese knotweed, the top ten is rounded out by Rotherham in eighth, Shepherd's Bush in ninth and Nottingham in tenth.

The company has built an interactive heat map called Exposed which collected information on more than 54,000 infestations.

Users can browse the map to see how many infestations have been reported within a 4km radius (2.5miles) of any location in the UK, or can search by postcode.

Japanese knotweed is exceptionally strong and its roots are capable of growing through concrete, drains, mortar, brick and even cavity walls.

The weed is incredibly hard to control, as its underground roots grow stronger and faster than the above-ground plant which is visible to gardeners.

A study by scientists at Swansea University in 2018 found the plant is impossible to manage with standard measures. After 19 different attempts, they failed to control it.

Homeowners are unable to control the spread of the plant themselves, with expert help needed in order to eradicate it once it takes root.

It hibernates throughout winter but exits its phase of dormancy in the spring, growing again in March. This growth phase can be easily spotted as distinctive red shoots which look like asparagus emerge.

Other telltale signs of the plant are its distinctive shield-shaped leaves, pretty white flowers which bloom in the summer, and pink-flecked stems.

The plant grows rapidly in the summer months, surging around four inches (10cm) every day between May and July until it reaches a height of up to 10ft (3metres).

The plant is native to the Far East and was brought to Kew Gardens in the 1840s for its beautiful flowers but it grew out of control and has now spread across the British Isles.

The Government estimates it would now cost £1.5bn to clear the UK of knotweed.

Its destructive ability means it can be a nightmare for homeowners as it not only poses a structural risk but reduces a property's value by around ten per cent.