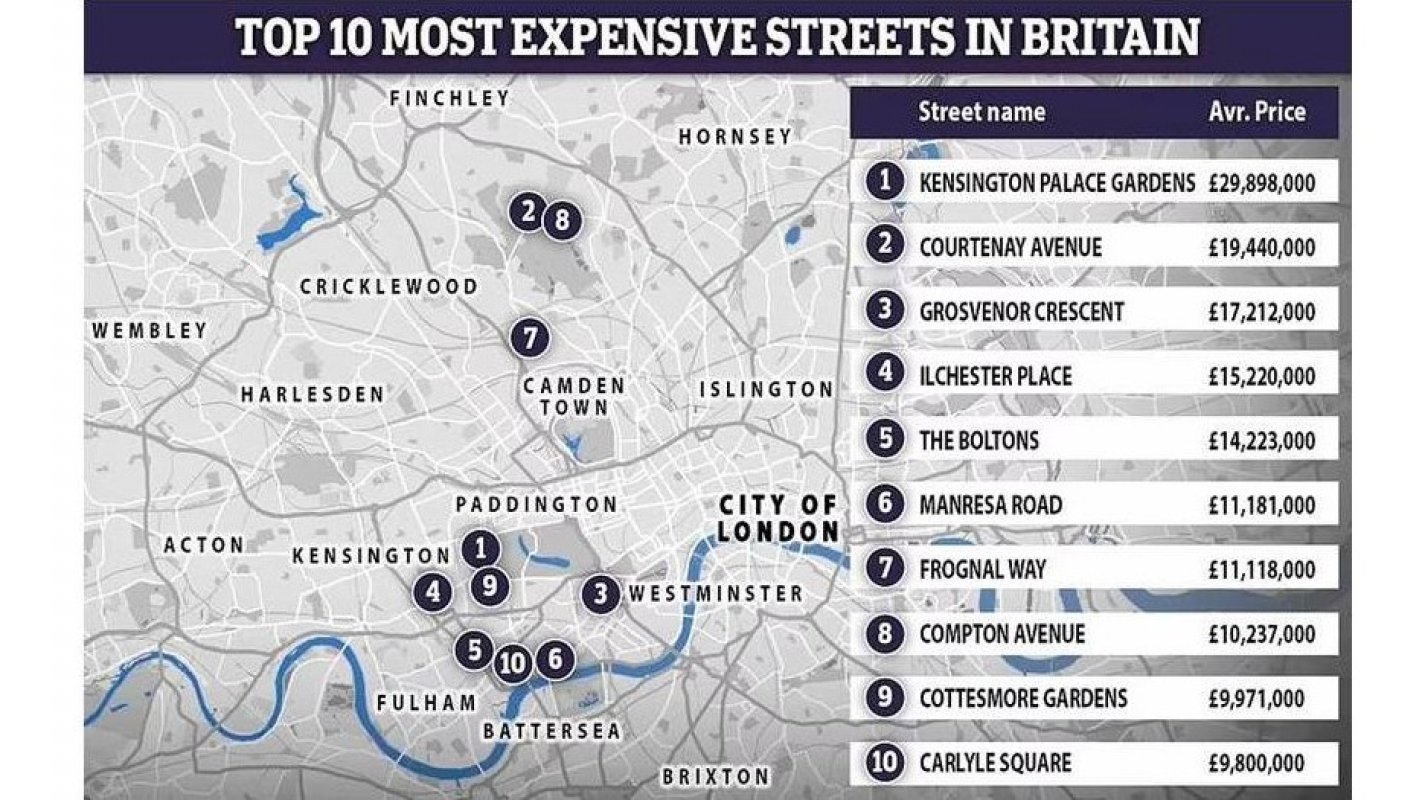 Kensington Palace Gardens has been crowned Britain’s most expensive street for the 13th year running.

With an average property price of just under £29.9m, the street is well known for its embassies and billionaire residents.

It also counts Kensington Palace, home to the Duke and Duchess of Cambridge, among its neighbours.

In fact, all of the top 10 most expensive streets in the country are in London.

And all of the 10 most expensive streets outside of London are within commuting distance of the capital too.

There are now a whopping 11,673 streets in Britain where the average home is valued at £1m or more, our Rist List for 2021 shows.

Gráinne Gilmore, head of research at Zoopla, explained: “This data illustrates how the type and size of properties coupled with some of the most desirable locations around the country create prime areas, resulting in some of the most valuable residential streets in the country.”

What are the 10 most expensive streets in Britain?

While Kensington Palace Gardens was the priciest street for the 13th year running, Courtenay Avenue, on the edge of Hampstead Heath in London’s Highgate, took second place for the third year running. Homes on the road would set you back £19.4m.

It was followed by Grosvenor Crescent in Belgravia, where homes command an average price tag of £17.2m. The street is just a short stroll from Buckingham Palace Gardens.

There were 3 new entrants in the top 10 this year: The Boltons, Frognal Way, and Carlyle Square.

What are the 10 most expensive streets outside London?

Titlarks Hill in Ascot, Berkshire, where the average home costs £8.4m, is the most expensive street outside of London, knocking Leatherhead off the top spot.

And Montrose Gardens in Leatherhead, Surrey, located within the exclusive Crown Estate, is the second most expensive place to buy a home outside of the capital.

Meanwhile, 5 of the top 10 most expensive streets outside of London are in Virginia Water, Surrey.

They include Portnall Rise, the third most expensive street outside of the capital.

How many expensive streets are there in your region?

Unsurprisingly, London is home to the highest number of streets where the average property is worth £1m or more.

It is closely followed by the south east, with the east of England coming in third place.

At the other end of the scale, Wales has only 9 streets with homes that cost an average of at least £1m.

Which towns have the most million-pound streets?

Guildford took the top spot for the town with the most streets on which homes are valued at an average of £1m or more.

It was followed by other towns within commuting distance of London, including Reading, Sevenoaks and Leatherhead.

Altrincham in Cheshire, an area popular with Premiership footballers, was the only town in a northern region to make it into the top 10.

And it was also the only town in the list not to be within commuting distance of London.