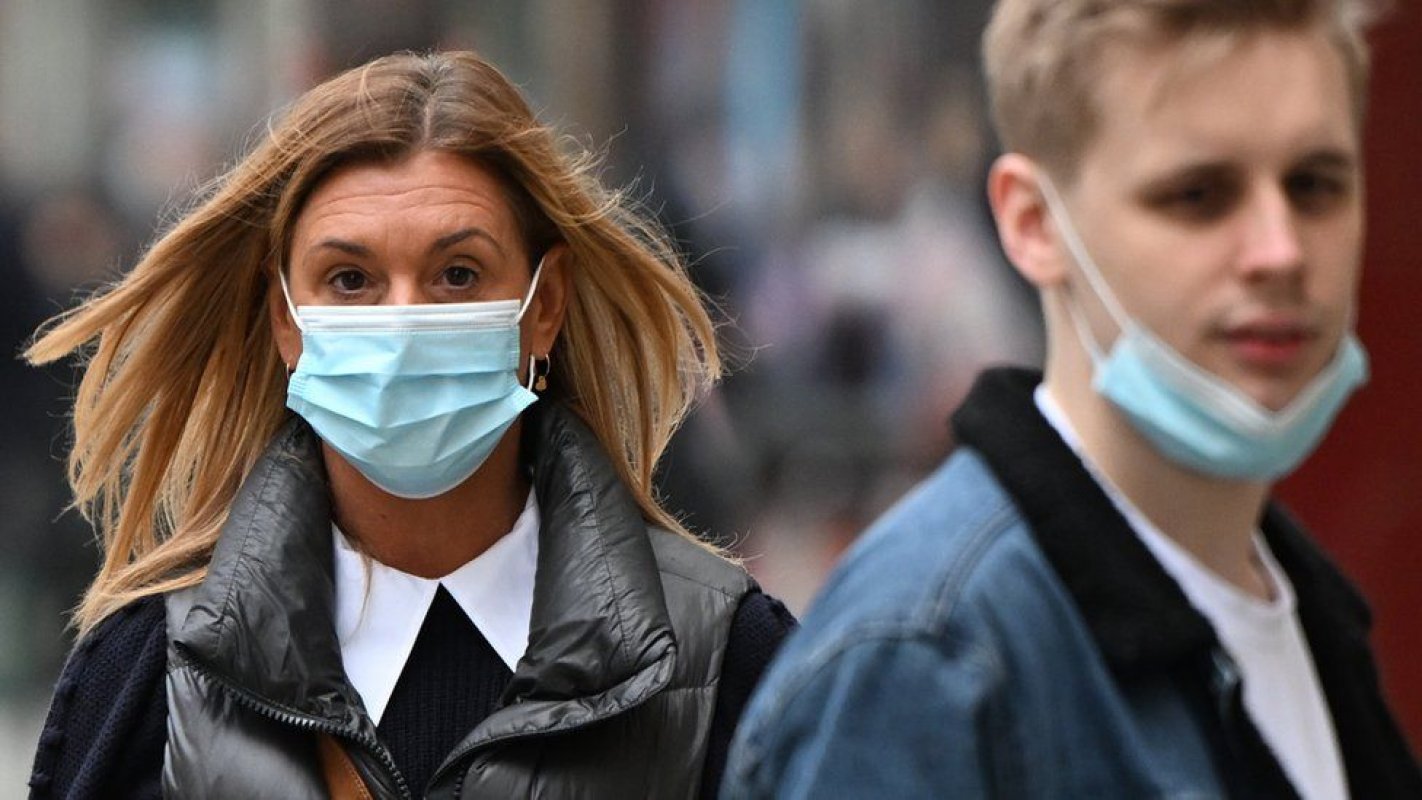 英國
Covid cases in the UK are on the way down - at least according to the daily figures released by the government.
The number of cases confirmed over the past seven days is 13% down on the previous week.
But does this really mean the Omicron wave has peaked?

These are, after all, only the people who come forward for testing.
As infections have risen to record levels there have been reports of people struggling to get access to tests.
The figures also exclude - apart from in Wales - those who are re-infected, something that has become increasingly common with the rise of the Omicron variant.

And a regular Office for National Statistics survey, that aims to calculate levels of Covid in the population at large, appears to show the testing programme is picking up a smaller proportion of cases than it once did.

What's more, the latest data from that survey suggests the numbers infected went up last week from 3.7m between Christmas and New Year to 4.3m in the first week of 2022.

It means there needs to be a degree of caution when it comes to interpreting what exactly is happening with infections.

Good news from hospitals
Instead, the biggest clue this wave may be peaking, or at least peaking on the measure that matters most, is how many cases are ending up in hospital. From this data we can see the number of admissions appears to have plateaued at just above 2,200 a day in the UK, about half last winter's peak.

Given there is a 10-day lag between being infected and ending up in hospital this plateau has happened at a time of rising infections - further evidence of just how different this wave is from previous ones. 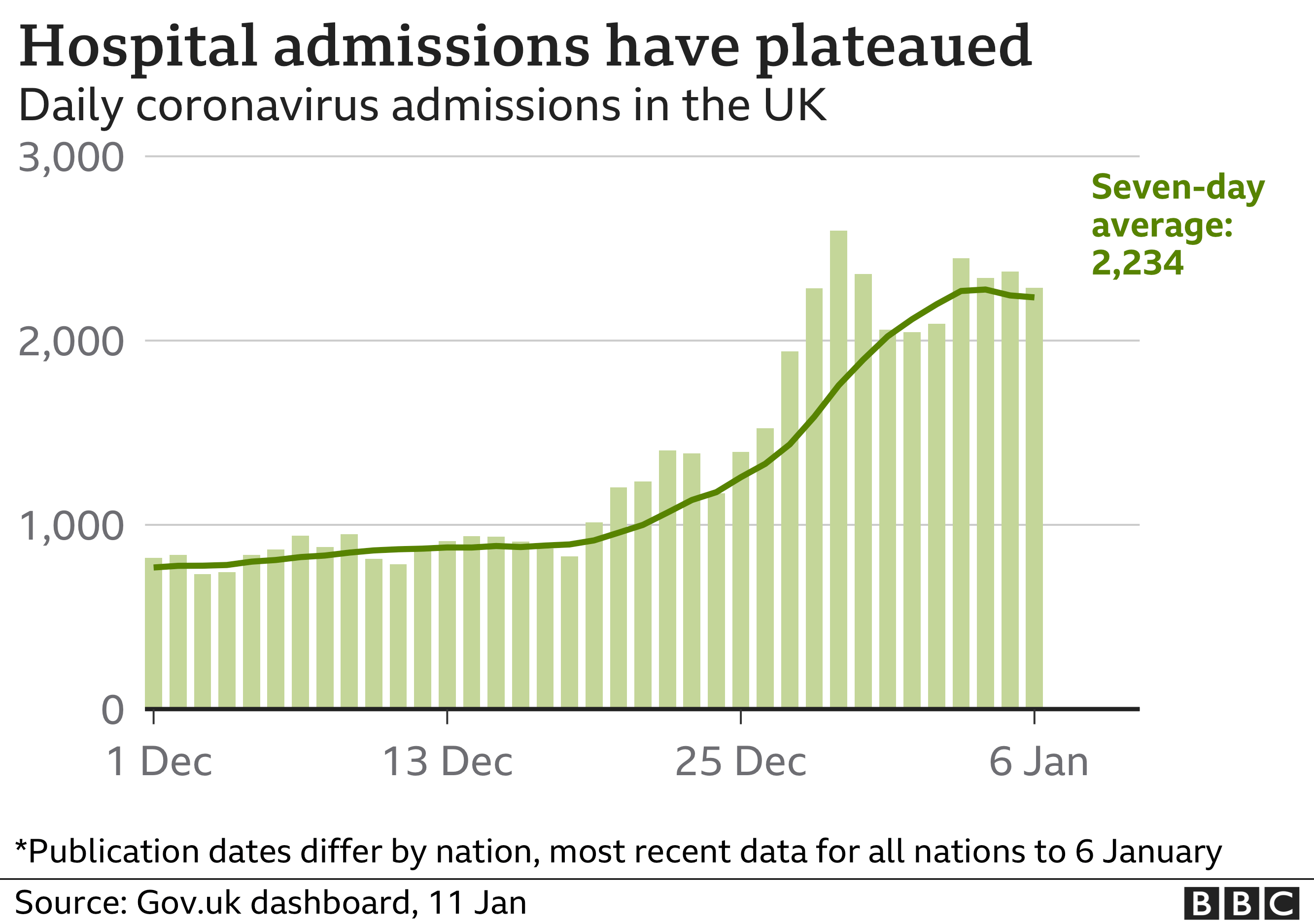 The national figure, however, masks what is happening regionally and between different nations.

London, where Omicron took off quickly, started seeing a drop first. There is now a clear downward trend in admissions. 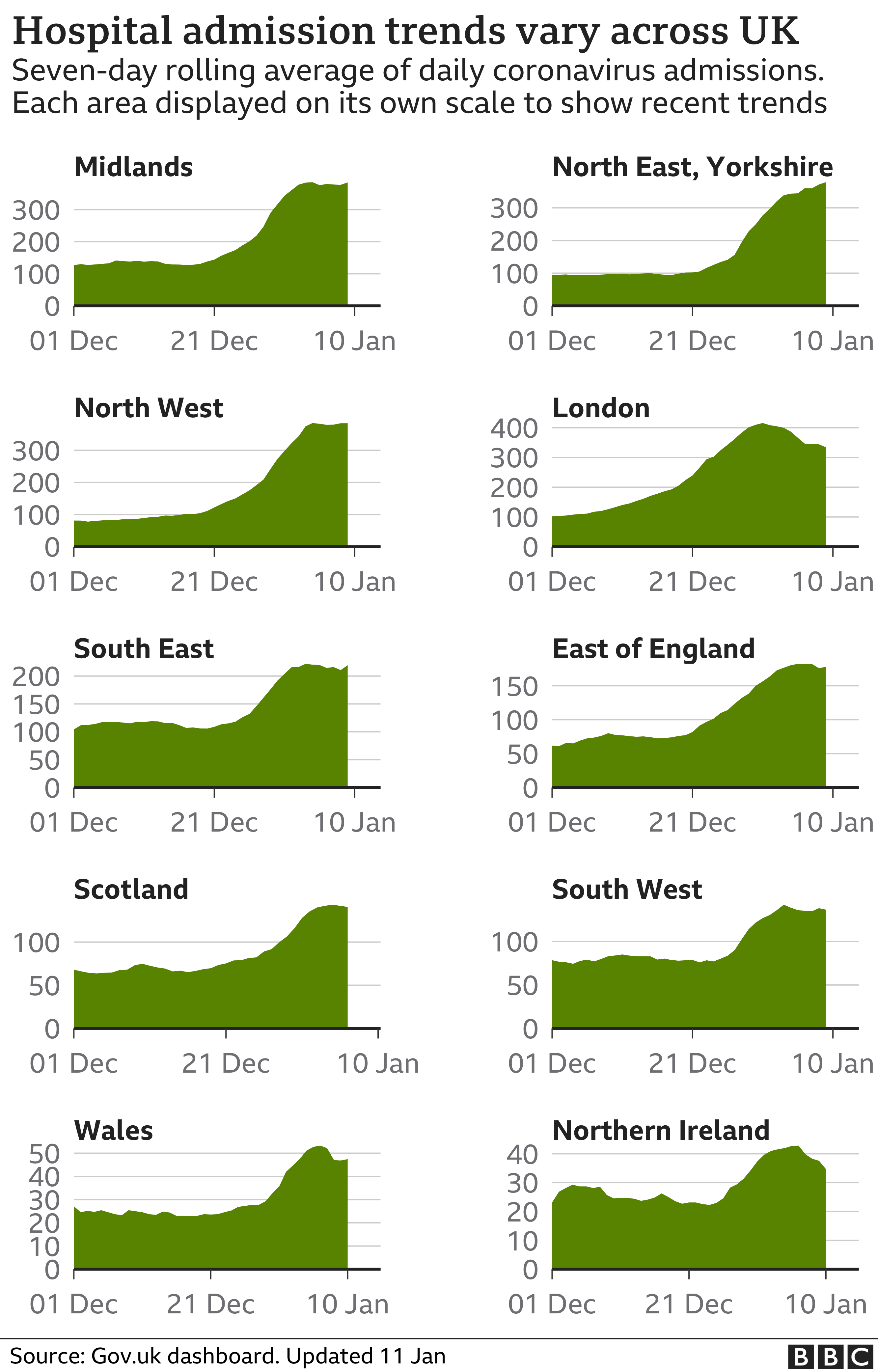 Elsewhere there are signs of falls too, or at least a flattening.

But the trend in the north-east of England and Yorkshire is still upwards. Omicron has not peaked everywhere - at least in terms of hospital admissions.

The situation could change
Some experts have expressed concern this overall levelling off could be short-lived though. The fear is a greater proportion of the infections could spread to older people, who are most at risk of serious illness.

There are some encouraging signs here, however. Firstly, the number of cases in the over-60s appears to be falling, along with that in lower age groups. 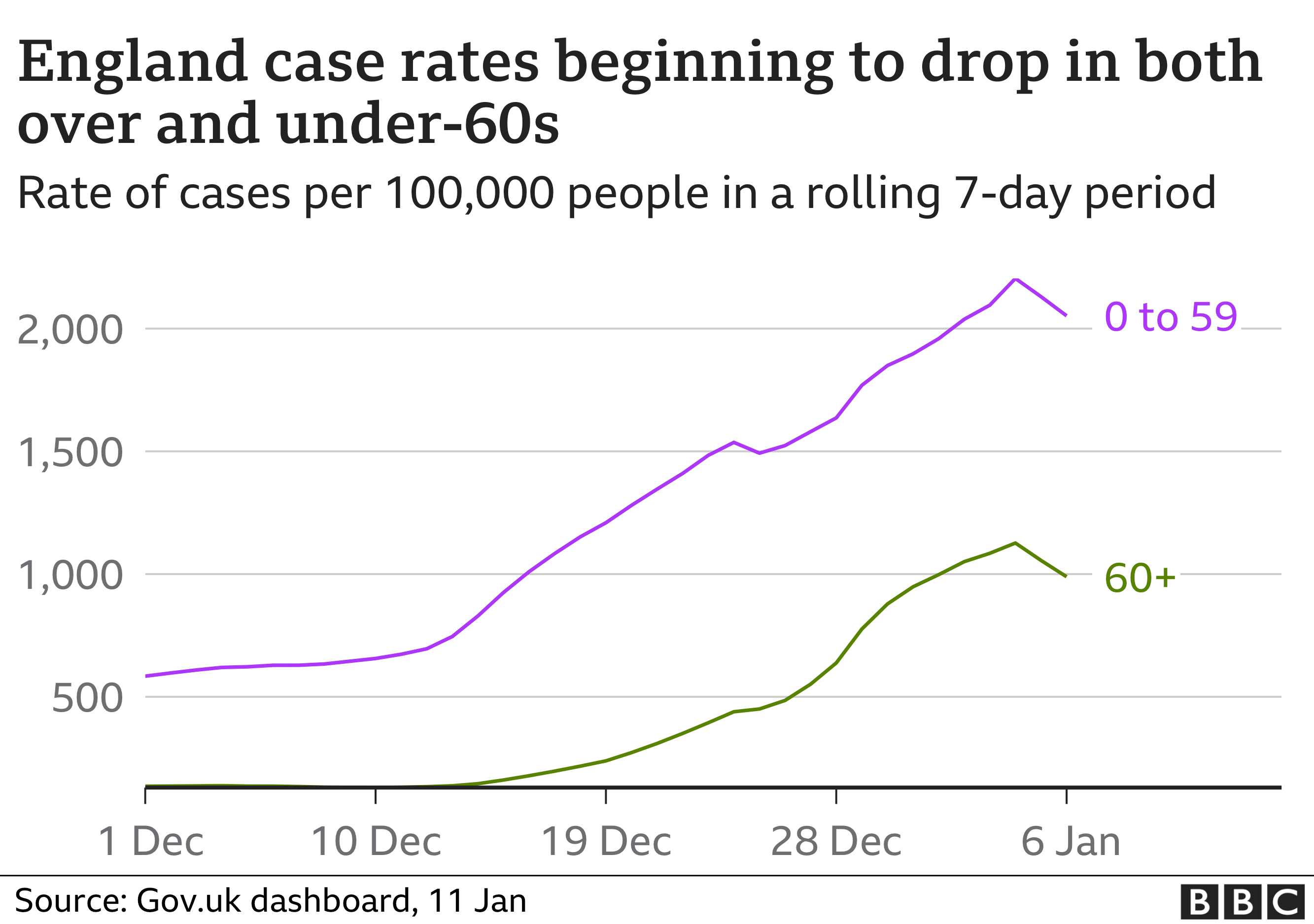 Secondly, the spread in older age groups does not seem to be translating into the hospital cases you might expect.

NHS bosses say outbreaks in care homes have not led to significant numbers becoming seriously ill. The boosters seem to have had the desired effect.

"There are some promising signs - the outcomes at the moment certainly look better than feared", says Prof Graham Medley, an expert in infectious disease at the London School of Hygiene and Tropical Medicine, and one of the government's lead modellers.

So is it nearly over?
But Prof Medley says there is still a risk of a long, flat peak or for infections and serious illness to drop very slowly. Last winter the lockdown halted the virus in its tracks and ensured a relatively quick descent from the peak.

This slow decline has - to some extent - been seen in South Africa, where the variant was first reported. There, cases have been dropping much more slowly after an initial big fall once they peaked. 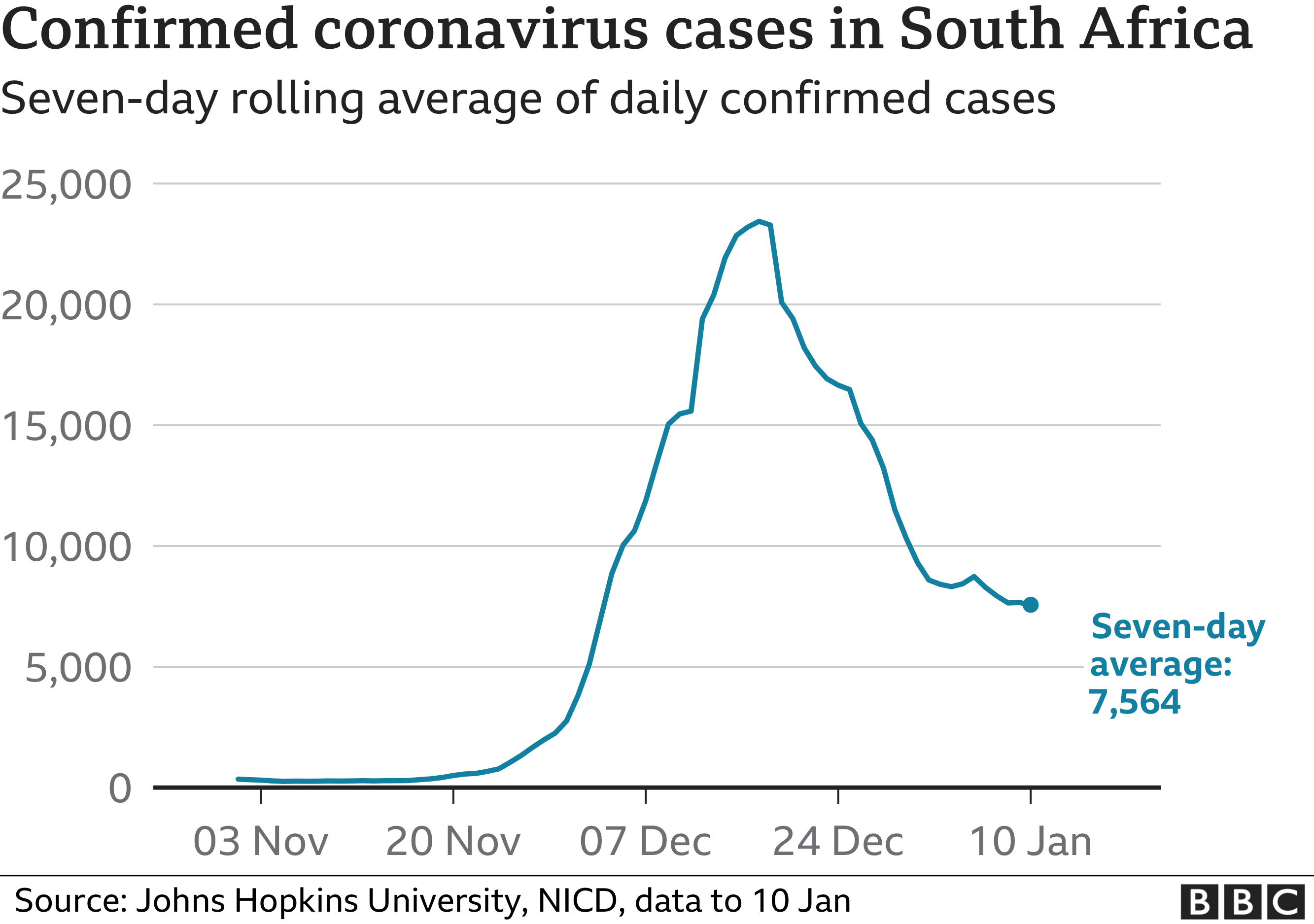 "If we stay at or close to the levels we have at the moment for some time, the NHS will remain under huge pressure," says Prof Medley.

What will determine that are two key factors - immunity and public behaviour.

While there has been much talk about waning immunity, the sheer number of infections over the past month or so and the number of boosters given means, in the short-term at least, immunity across the population should hold up well.

It is mixing that is likely to have a greater impact, says Prof Mike Tildesley, from Warwick University.

Survey data suggests at the end of December people were averaging 2.7 contacts a day - not that much above what was seen during the very first lockdown.

"People were really taking care over Christmas, reducing their mixing so they could spend time with family," he says. "But... with schools back and people working again... we could see infections go up again."

However, it may only be a "bump", he believes. "I don't expect to see a surge in admissions now - not to the level of last winter."

If he is right, that leaves the UK very much in best-case scenario territory. When Omicron took off there were warnings hospital admissions could end up more than three times as high as they are now. There may still be a long way to go, but it's looking promising compared with what we were told could have happened.