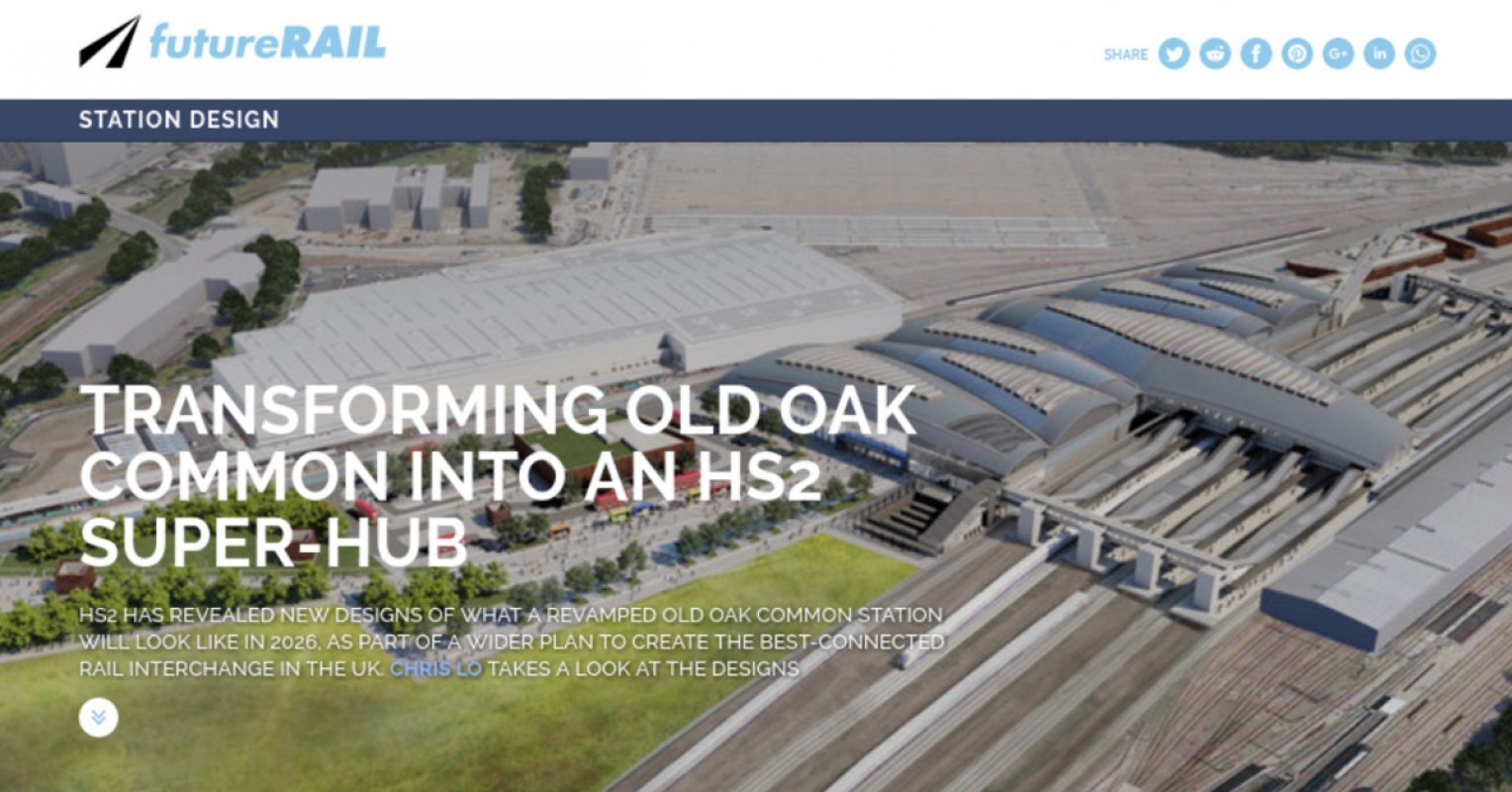 The £1.7bn rail station that will take you longer to get to than the journey itself! Work begins on HS2's Old Oak Common 'super hub' in Acton that promises 'London to Birmingham in 35 mins'

Construction of the new Old Oak Common HS2 train station in West London will today be given the green light, as it emerged it will take the same time to get to Manchester by the railway line as it would to drive across the capital.

Transport Secretary Grant Shapps will visit the 32-acre site today as he approves what will be Britain's largest rail station built in a single stage. The £1.7billion project in Acton will get the go-ahead for permanent works which will involve a 1.1-mile-long wall being built underground as part of the installation of 14 platforms for different lines.

Developers HS2 Ltd said the station will include six HS2 platforms for services to the Midlands and the North, four Crossrail platforms, and four mainline rail platforms served by trains to and from the South West and South Wales.

Journeys from Old Oak Common once the HS2 network is completed will take just 38 minutes to Birmingham Curzon Street, 64 minutes to Manchester Piccadilly, 74 minutes to Leeds and five minutes to London Euston.

Driving to Old Oak Common from Stratford in East London takes 64 minutes based on traffic today, which means it will take the same time to drive across the capital as it will to go from Old Oak Common to Manchester by train.

In comparison, the journey time from Stratford to Old Oak Common will take 25 minutes by Crossrail, 40 minutes on the Underground's Central line to North Acton, or four buses taking a total of two hours and 25 minutes.

Old Oak Common - set to open in 2030 near the current North Acton, East Acton and Willesden Junction stations - will involve more than 2,300 workers and have a roof covering the area of more than three football pitches.

HS2, which Boris Johnson approved in February 2020, was a major issue in last week's shock by-election defeat for the Tories in Chesham and Amersham, because it is being built through the Buckinghamshire constituency.

It comes as the high-speed rail project's costs have spiralled due to the suspension of work at most sites at the start of the Covid-19 crisis, combined with social distancing measures causing delays and reduced productivity.

The cost of HS2 is said to have jumped by another £1.7billion in the past year with the price of phase one between London and Birmingham having risen by up to £800million, sources close to the scheme told the Financial Times.

But HS2 Ltd denied claims that either cost had gone up, saying the budget for phase one remained at £44.6billion, including contingency for unforeseen events such as Covid-19, and the project was still within this figure.

HS2 Ltd, which is the company responsible for developing and promoting the network, said more than 2,300 jobs will be supported at Old Oak Common at 'peak construction' while more than 250 apprenticeships will be created.

Work will now begin on constructing the 1.1-mile long underground diaphragm wall around what will become the station's 'underground box', where six HS2 platforms will sit for trains to the Midlands and North.

Pilling rigs will install 160 reinforced concrete columns inside the wall to help form the box and support the structure.

After the first phase of construction has been completed to create the 750,000m3 box, work will commence on the eight overground platforms.

More than 1,600 concrete piles will be installed into the ground on which the station main structure and overground platforms will sit.

HS2 Ltd said a lightweight roof structure has been designed to 'minimise the use of materials and allow as much natural light in which reduces the carbon impact of the station'.

It added: 'The environmental credentials of the station will be boosted by solar panels covering the roof, generating a supply of renewable energy for the station.'

The station design development has been led by engineering professional services consultancy WSP with architectural support from WilkinsonEyre.

Mr Shapps, who will visit the site today, said: 'The start of permanent works at the largest train station ever built in the UK in one go, Old Oak Common, marks yet more progress in delivering HS2, the high-speed, high-capacity and low-carbon railway that will form the backbone of our national transport network.

'This 'super hub' station shows our Plan for Jobs in action - kickstarting major regeneration, creating 2,300 jobs and 250 apprenticeships in construction - and underlines this Government's determination to build back better.'

The longest escalators on the HS2 network will be at Old Oak Common, which will take passengers 44ft (13.5m) up from the subsurface platforms to concourse level.

HS2 Ltd chief executive Mark Thurston said: 'The start of permanent works at Old Oak Common station, our first station under construction, is a significant step for phase one of HS2, as we deliver world-leading engineering to create what will arguably be one of the best-connected railway super hubs in the UK.

'Over 2,300 jobs will be supported to build the new station; part of the 22,000 jobs being created to build the new high-speed railway between London and the West Midlands, and emphasising the key role HS2 is playing in Britain's economic recovery after the pandemic.'

More than 250,000 passengers are expected to use the station every day, with HS2 Ltd saying Old Oak Common 'will become one of the country's most vital transport hubs and a catalyst for economic regeneration for the area and the rest of the UK'.

It added that plans to transform the wider area around the station, a former railway and industrial site, are being led by the Old Oak and Park Royal Development Corporation (OPDC), which project that tens of thousands of new jobs and homes will be created around the new HS2 station.

Balfour Beatty Vinci Systra (BBVS JV) is HS2's station construction partner after being awarded the contract in September 2019. Its project director Nigel Russell said: 'This incredible milestone is testament to the dedication of our team, who have worked tirelessly to make this moment happen.

'With many more years of work to do, we are proud to be delivering one of Britain's largest, connected and sustainable railway stations whilst simultaneously stimulating the local economy.

'Through our work, we are providing numerous employment opportunities for local people, as well as offering 250 apprentices the opportunity to start their career on the UK's most exciting engineering project.'

The Financial Times reported yesterday that HS2's costs have jumped by another £1.7 billion in the past year as the coronavirus pandemic adds further pressure to the project - although this figure was denied by HS2.

The scheme's £44.6billion budget for phase one between London and Birmingham includes £5.6billion of contingency funds. The Department for Transport said final assessments of the impact of the pandemic 'have not been made'.

The Government-commissioned Oakervee Review warned in 2018 that the final bill for HS2's entire Y-shaped network could reach £106 billion.

Despite it running tens of billions of pounds over its initial budget, and several years behind schedule, Prime Minister Boris Johnson gave HS2 the green light in February 2020.

HS2 was a major issue in last week's shock by-election defeat for the Tories in Chesham and Amersham. The high-speed line is being built through the Buckinghamshire constituency.